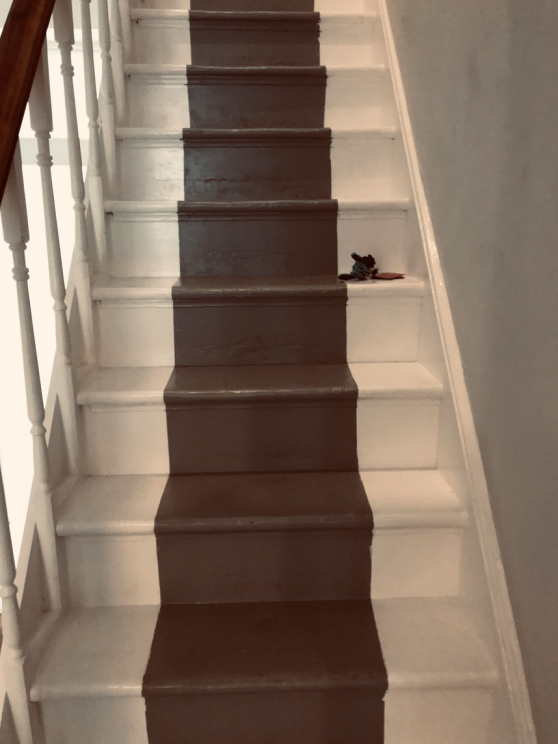 Competition Three Shortlisted: Halfway Up the Stairs by Brid McGinley

Joe crouches on his favourite step, body folded, cheek resting on a scabby knee. Halfway up the stairs, quick access up to his bedroom, quick escape down the front door. Sara stands sentry-like in the hallway, the front door in her peripheral vision. She reaches her hand towards her brother’s head, strokes soft curls. His sparkling exuberance and his wild abandon have been her joy for all of his eleven years. Now she reads the slump of his shoulders, his shallow breaths. The air thrums with distress, a dissonant vibration.

Joe lifts his head, speaks to the startled air. ‘I don’t care what happens, doesn’t matter, even if he’s in a wheelchair, I’ll look after him.’

Joe and Harry, best friends, blood brothers, musketeers. ‘Don’t climb the water tower,’ their mothers’ mantra. Sara blanks the memory of screams, of the rusted ladder lying across Harry’s back, his splayed arms and legs, his two-dimensional figure nestling in soft grass in the tower’s shadow. How still he lay, fully inhabiting his role even as he was lifted into the ambulance, even as the siren screamed.

In the hall the cuckoo clock swings its leafy pendulum, ticking a lullaby as Sara rubs the rivers of time in the grain of the newel post.

‘He was almost at the top,’ Joe says. ‘I was halfway. One wobble. Then a snap, just over my head.’ He looks away towards an unreachable endpoint. ‘It just spun out, slow, like a windmill. Harry holding on.’

Later they hear the car stop outside. The pendulum slows, the door handle turns, hinges creak, their mother’s shadow rises ahead of spilling sunshine to where Joe waits, now standing on his favourite step. A silent beat, time stops. Up or down, now there is no escape.

Bríd McGinley is from Co. Donegal in north west Ireland. A latecomer to writing, she enjoys working on the small canvas of flash fiction, creating stories with few brushstrokes. Her fiction has appeared in The Bangor Literary Journal, Flash Flood, The Bramley, Sonder Magazine and The Honest Ulsterman. @BridMcG