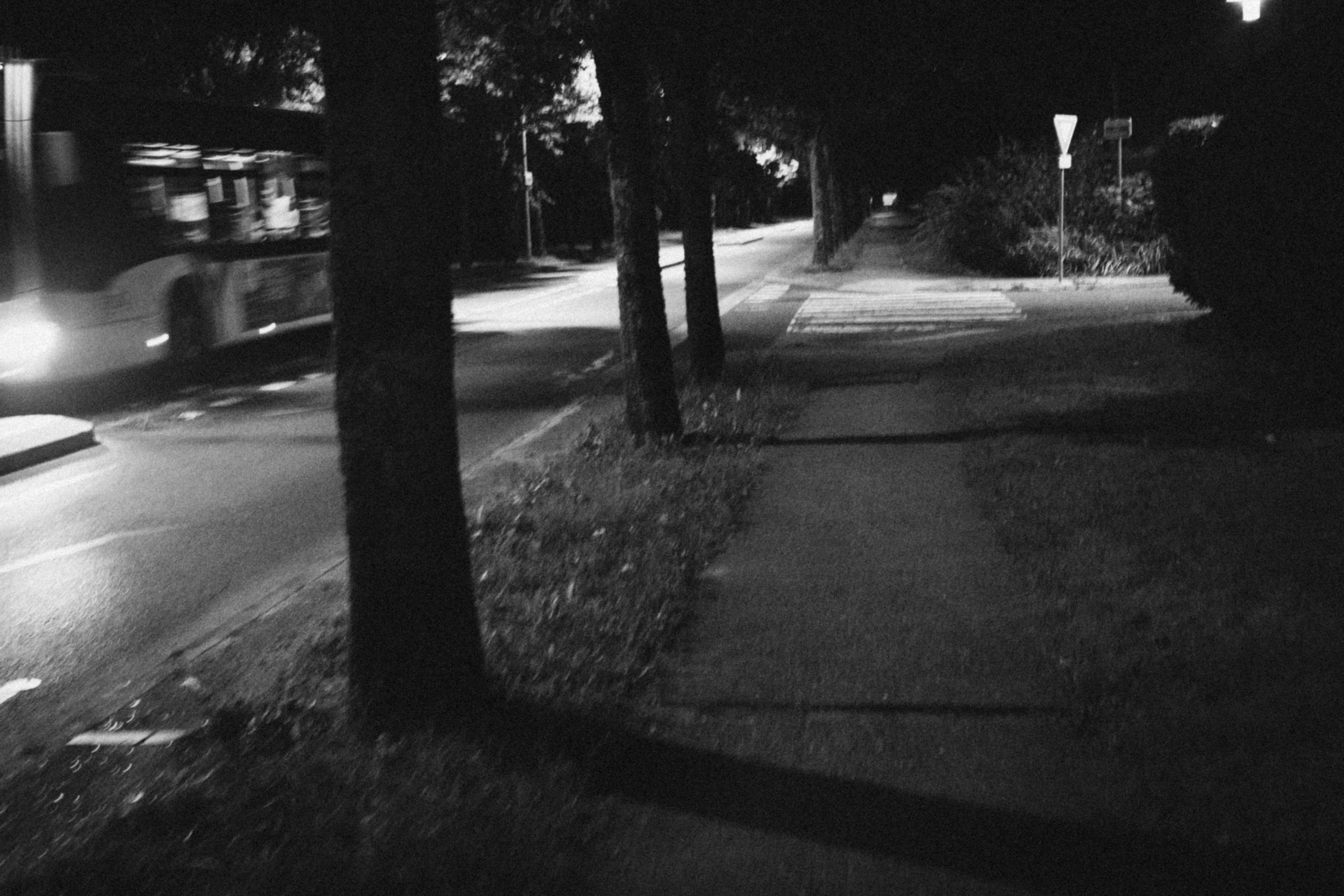 A blue-lit night bus streams across the wet black street as the rain shower abates. The air tingles. I feel alive for the first time today. How strange to say that. How strange to think that for the rest of the day I felt as though I didn’t exist. I talked to no one, looked no one in the eyes, touched no one. Earlier, before the rain, a man walking a dog glanced at me and pulled his dog’s leash. The dog looked at me as his master tugged him the opposite way. This happens on occasion when I go for a walk in the neighbourhood. People with dogs turn away from me. Are they afraid their dogs will harm me or that I will harm their dogs? Most often, when I encounter dogs, I can chalk the results on the win side of the blackboard. This is not true of my encounters with humans. I suspect it’s because I’ve grown ugly over time. I was quite handsome as a young man. That lasted a few years then the slow descent into my current state began. I can barely look at myself in the mirror these days. But physical ugliness only draws so much displeasure and scorn. Something rotten in the soul, in the character, must exude outward to repel people in such numbers. One must radiate a negative energy that others abhor. This may be the case with me. I’ve fallen so far into the abyss it’s obvious, and people are right to steer wide. Then again, one evening while walking through the neighbourhood, two thugs accosted me. They didn’t share the general conception that I should be shunned. They actually wanted to touch me, albeit violently. But I’m a madman, and no one should fuck with a madman unless they’re well-armed. Luckily, only one thug was armed, with a knife to be exact, which I kicked out of his hand early in the scuffle, before I kicked him in the nuts, before his friend rocked me with a sucker-punch to the jaw. But I can take a punch. He thought he’d hit a home run: I didn’t even see stars. Then a police cruiser appeared out of nowhere, lights flashing, a brief siren burst alerting us to stay put. I stood there rubbing my jaw while the thugs sprinted off at two different velocities. That nut pain comes on late and lingers for a long time. I didn’t envy that guy, the ruptured one. The officer asked me if I was all right, and this heartened me, for he might have asked what I had done to those boys. But I suppose the optics suggested that I was the victim, that I had been brutalized, not that I had taken a good punch from one thug, yes, but had also kicked the other in the testicles, something he would never, for the rest of his days, forget.

Would you like to get an occasional email update – with news of stories, updates and competition deadline notices? – sign up – the form is on the competition page here…