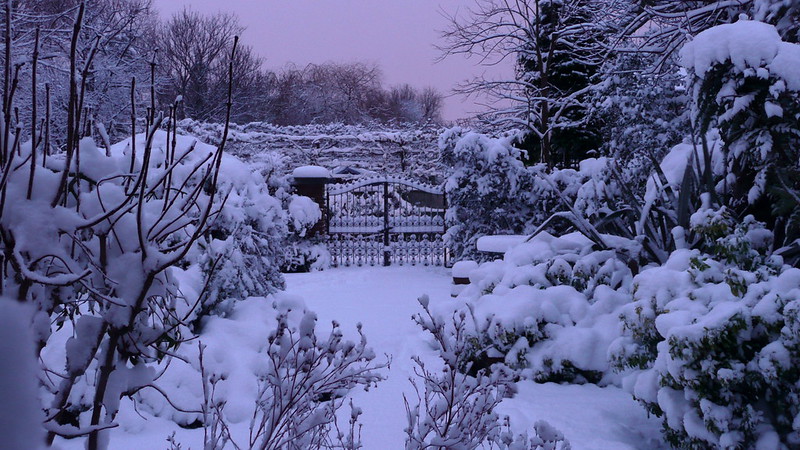 Rare enough here for us only to have the one word; snow. But still, it amazes with variety. Even in the course of a few hours, a whiteout fades to a gentle dusting, or slowly falling flakes storm up to a blizzard. We are at the convenience of the weather. The rumble of cars is occasional, there is no footfall past the drive. I closed the gate three weeks ago. That was a mighty stagger to and fro. Since then, my peace is undisturbed. The postman ghosts along to other houses but has forgotten me, I think. That said, perhaps I have no prospect of letters, having made no communications myself with the outside world. Many a day it’s been, since last I even spoke out loud.

Snow settles on snow. The sky has that pallor of dark milk and unfathomable intent. Snow that heralds the freezing over of the world, or just as easily, a light frosting, done by sundown. A hard killing winter twenty years ago, gave way to mild and sodden times. A generation was raised without cracked pipes or toboggans, imagine that.

I’ve been a week on the floor, though I can open the fridge and reach in for what can be found. I’ve drained the water, juice and cream now, and further liquid is an urgent concern. It’s the hip I suppose, not the replacement but the other poor splintered bone, grinding away in the thigh until it had to snap. Down I went, there was nothing for it but to crumple gracefully and embrace the collapse.

I must come to terms for I understand there’ll be no deliverance from this. My consolation is snow. It feathers down, it drowns the world, it muffles all and kisses us to silence.

Snow at The Orangery – 7.20am – Photo by Herry Lawford