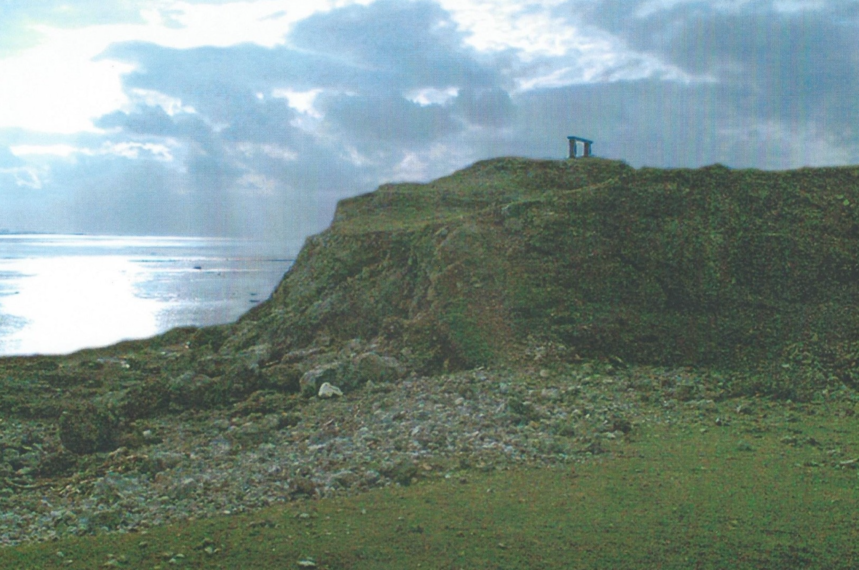 From the seat he looks across the bay.  Gathering clouds, blue sky and grey-green waves fill his vision.  The tide is rolling out exposing an expanse of sand running eight miles across to the opposite side. He’ll watch until it disappears. He should be feeling good as this late spring day draws in but he can’t because his world stops at the seat. Beyond it is the world of might-have-been.

The seat is a plank nailed across two timber uprights set into the headland to form a bench. The headland comprises slag deposits from the ironworks in the town, dumped in a line around the salt-marsh edge to create a causeway, its slopes now covered under advancing marsh grass as nature continues its relentless battle against industrial despoliation. It’s a battle that the marsh grass is winning.

He’s no reason to complain.  Well into old age, he’s enjoyed a good life; full employment, sound health, relatively little stress.  Settled in his nice bungalow with his wife and pension, his children progressing their own careers and raising their families, he knows that he is fortunate.  But, here he is again, another year later, with a memory that he can’t shake off in the place where he always returns to relive it.

At 16 she’d been his first love.  What attracted him was her slim, elegant beauty. What intimidated him was her funny, clever and above all, confidant manner.  He wasn’t ready for it.  She’d chosen him but he couldn’t understand why. He couldn’t believe his luck, couldn’t handle it.  He hadn’t known what to do, or how powerful and how transient such a relationship could be.  They’d meet at the youth club.  She’d talk easily, he’d listen awkwardly.  He’d pretend to be strong and silent but felt foolish and shy. He’d known that he was making it hard work for her. She’d suggested that he take her on that new season’s first Cross Bay Walk. He’d agreed … it was a date.

Waiting for the weekend he’d grown more nervous.  On the day he’d ran with the lads, kicking a football against the breeze, avoiding her until they reached the other side, wanting to be with her but afraid of how it made him feel.  He’d known it was over as soon as he’d approached. She’d just looked at him and turned away. He’d blown it.  She’d left with her friends.  They’d sat apart on the train as they journeyed back around the bay. He’d never tried again.

From the seat, as the tide goes out, he can see the crossing points.  He still sees her around the town.  They’re polite and friendly.  They chat but never mention the past.

Walking back along the estuary from the seat he adjusts his mind, shrugs off the memory, re-dons his armour.  It’s no good dwelling on what might have been.  Eventually the seat will rot and the marsh grass will claim the top of the headland. Spring will pass, as always.

David Lewis Pogson is fiction writer for ACES ‘The Terrier’ magazine, living in North Lancashire, England. He has been published in a variety of media. Winner of the Cumbria Local History Federation Prize for ‘The Ulverston Bank Clock’, the Freerange Theatre Company’s Playframe Short Story and Microcosmsfic.com Flash Fiction competitions.

2 thoughts on “The Seat at the Edge of the World”