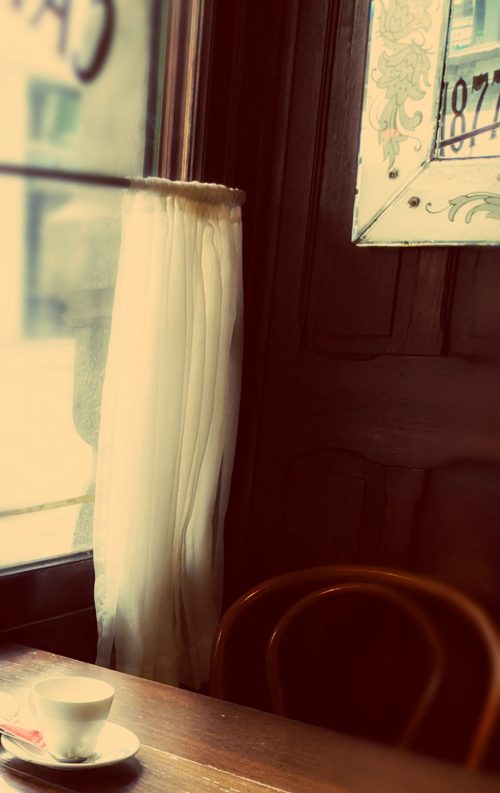 The mirrors, pock-marked with age stare blindly back at Reggie.

Thirty-two years ago, when she first sat here, the murkiness of the glass irritated. She wanted to see her carefully crafted persona. That casual air, which requires so much effort. The classic French novel, spine-cracked, lying face down on the polished table, open at about a third of the way through. She didn’t want to seem like she’d only just started it; that would never do. But if it was open towards the end, there was the outside chance that someone would talk to her about it. This was that kind of café. The kind you see in French films where nothing really happens and you leave the cinema, secretly thinking about the hours of life you’re never getting back but the words which come out of your mouth are gushy and faux erudite.

Now, at fifty-three, she could happily talk, with a confidence built over years of research, about literature, art, current affairs. But no one ever asked. The chance café encounter had remained a thing of dreams. Maybe if she’d stayed in this city, made her life here, she could have stepped into that film, lived a languorous life, reading by a tall open window, a lace panel drifting across her bare legs.

Home had called. Daddy was ill. Mummy couldn’t cope. Reggie had packed a couple of boxes and waved her future goodbye in the rear-view mirror. It had taken Daddy three decades to die.

Reggie stirs her coffee. Single espresso, small jug of hot water on the side. She looks across at the mirror and smiles, at the blurred vision of the present it throws back at her. Her reflection could be that of a young woman. Except for the slightly burdened shoulders and the less guarded smile.

She checks her watch. She has time for another coffee before picking up the key from the agent. He’s found an apartment for her. An apartment with tall windows and drifting lace panels.

R. J. Kinnarney is trying to make sense of their tiny corner of the world, through tiny pieces of writing and lots and lots of reading. When not distracted by a myriad short story ideas, they are currently working on a novel, which focuses on what it is to be strong in the face of challenge and prejudice. Work can be found in all sorts of places. Winner: Briefly Write, Southam Book Fest, Didcot Writers. Placed/Highly Commended: Bluesdoodles, Strands International, Glittery Literary.  Links to published works on rjkinnarney.com Twitter: @rjkinnarney