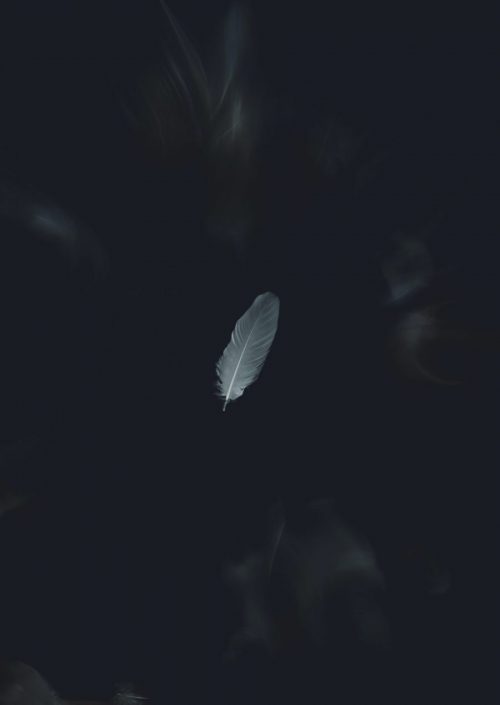 Just a Bird by Cath Barton

It was the third time I’d seen it that week. It had a white feather in its left wing.

It wasn’t even the end of August but there was a change in the air, a draft of eastern chill coming off the still-dark water, and the wooden boards of the balcony felt damp underfoot.

Gulls were common on the river, wheeling and shrieking. This was not a gull. It was sleek and purple-black, apart from the one white feather.

‘Shoo, go, get off!’ Nate flapped his towel and the bird lifted and flew away in a wide arc.

‘It wasn’t doing any harm. You startled me, shouting like that.’

We were both working from home, Nate in the spare room, me in the living room; I liked looking out over the river. By 10 o’clock it was getting hot. I pushed the balcony door open and repositioned my chair so I could feel the morning breeze on my face. It carried a strong smell of fish mixed with engine oil.

As the bird with the white feather landed on the balcony and hopped through the open door I heard Nate’s footsteps behind me. There was a moment of silence before the room was filled with the noise of his yelling and the bird’s screeching and flapping. I ducked down. Heard the dull thud of the balcony door and a shuddering reverberation through the glass.

I looked up. There was a long scratch on Nate’s face, a line of blood blistering his skin.

He just walked back to the spare room and clicked the door shut.

Things hadn’t been good between us since a night when I’d stayed out late once too often. One of those times when a drink after work turns into a whole evening. You’re relieved when you arrive home and find your husband asleep.

‘Drink that,’ he said, pointing at the pint glass of water on the table.

That was when the sound of derision first came into his voice. A crack opened in our relationship. I didn’t stay out late drinking again, but conversation died on our lips as food dried on our plates and we pushed them and one another away.

Something had been bound to happen to force a change. I made one last effort. That night I cooked us duck and made pasta from scratch. It wasn’t enough.

I knew when I woke up. Knew before I read the note he’d left on the table. Knew too that the bird had been a harbinger. I looked down into the dark water of the river, half-expecting to see the creature’s lifeless body floating there, but there was only scum and bits of detritus.

I closed the balcony door, made sure it was secure, just in case. Only later did I find the white feather. Nestling on my pillow.

Cath Barton is an English writer living in Wales. She is the author of two novellas: The Plankton Collector (2018, New Welsh Review) and In the Sweep of the Bay (2020, Louise Walters Books). Read more about her writing on her website https://cathbarton.com     She tweets as @CathBarton1

Photo by Evie S. on Unsplash